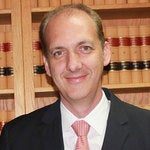 Sam J. Israels is a Law Firm partner with the Law Offices of Cron, Israels, & Stark. Mr. Israels received his J.D. degree from the Santa Clara University School of Law. Mr. Israels also previously worked at the Los Angeles Office of the City Attorney. He is admitted to practice law in the State of California.

Sam Israels was born and raised in Modesto, California. He attended Beyer High School. From there, he attended the University of California at Irvine where he majored in Social Ecology with an emphasis in Criminal Law.

After graduating, he worked in the entertainment industry for a few years in Los Angeles doing production work in both episodic television and mini-series. If you watch the credits of the television show Baywatch during a certain season very carefully, you may spot his name.

In 1998, Sam moved to northern California catching the technology wave. He worked for the Pacific Stock Exchange before settling at Credit Suisse First Boston doing equity research on the valuation of internet companies.

In 2001, Sam attended the Santa Clara University Law School where he was awarded the prestigious Witkin award. While in law school, Sam interned in the United States District Court for the now retired Honorable Ronald M. Whyte. During the Summer, Sam interned for the Los Angeles District Attorneys Office in their Hardcore Gangs Division. After graduation, Sam moved to Southern California.

Working in the City Attorney's Office gave Sam significant trial experiences. While in the office, Sam gained valuable experience handling trials involving Domestic Violence, Driving Under the Influence, Assault with a Deadly Weapon, Battery, Theft, Prostitution and more. Among the locales Sam did trial work in were the East Los Angeles Courthouse, the downtown Criminal Courts Building, the Metropolitan Courthouse, the Hollywood Courthouse, the Los Angeles Airport Court and the Van Nuys Courthouse.

In 2008, Sam left government work and joined the firm of Cron, Israels, and Stark. He enjoys the challenge of defense work and is gratified by being able to help people who find themselves in trouble. Sam believes his time as a prosecutor allows him to examine a case from both sides and that can often point to a resolution that satisfies his client and the prosecution. Working with pros like Phil and Steve has helped Sam refine his skillset. Sam has handled cases all over Southern California and in the Central Valley as well. In his free time, Sam likes tennis, racquetball, and barbeque.

Read what Sam's past clients are saying: